The Need for Educational Opportunities, Pt. 4 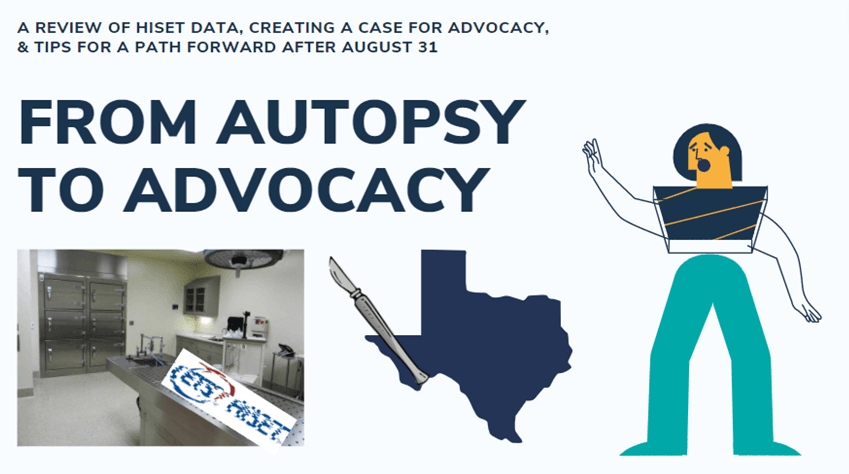 Late April 2022 marks one year since ETS HiSET announced that they would not renew their test offering in Texas for the next contract cycle. They stated 'a business decision' as the reason for not returning. In the months following that announcement, Tarrant Literacy Coalition staff doggedly pursued answers about why, especially when stakeholders around the state, and especially in Tarrant County, advocated tirelessly for test choice in the state from 2014-2016. Those answers, unfortunately, are unsatisfying.

The bulk of this article will draw on TLC Executive Director Wes Young's presentation "From Autopsy to Advocacy: A review of HiSET Data, Creating a Case for Advocacy, & Tips for a Path Forward After August 31 (2021)." It will conclude with updates as we know them.

We'll begin with two quotes that both guide and drive adult educators. First, education reformer John Dewey once wrote, "Education is not preparation for life; education is life itself." Second, from a peer-reviewed article by Patall, Cooper, and Robinson (2008), "Providing choice enhance[s] intrinsic motivation, effort, performance, and perceived confidence." Why, then, is the little-known fact that the number of High School Equivalency test-takers and passers in sharp decline since 2003* a reality?

Even though I can't hear or read your reasons, rest assured that your answers are probably partially correct. After all, there isn't just a singular reason. However, that fact should not be the reality. The first two articles in this series, exploring the high school dropout rate and incarceration numbers in Texas, proved that the need for educational opportunities is greater than it ever has been. Even a cursory look at the PIAAC Skills Map shows that Literacy and Numeracy levels have dropped across the state and nation. (In Tarrant County, basic literacy levels have dropped 4% in five years).

The first thing Wes did upon learning that HiSET was leaving Texas was to try to find actual test-taker numbers. They were not easy to find. Buried deep in the Texas Education Agency's website was the following chart.

At first glance, you might be thinking, 'Well, look at how few people took the HiSET test! It's no wonder that HiSET left the state when they barely topped 4% of the total number of test-takers.' and you wouldn't be wrong. However, you might also see that HiSET was cutting more and more into the overall market with each new year**, and be as intrigued as we were. So, TLC submitted a Public Information Request (also known as an Open Records Request) to TEA. We were seeking four things:

We chose to look at test-takers because there was a greater number than "passers" and "completers." We define a test-taker as a single individual that has taken at least one test. Multiple tests taken are not a factor in the test-taker number. After extrapolating data and assorting it into grids and boxes to help tell the whole story, we realized we needed some additional information:

Click here to see the full data extrapolation. Click here for the map of test-takers by county and test center distribution.

Here are some of the key findings:

It was then time to talk to the programs that work with adult learners. Wes reached out to the heads of the 37 Adult Education Consortia in Texas. These Consortia have specific numbers to achieve to continue receiving federal funding. Therefore, they are keen to ensure learners make gains and complete high school equivalency exams. Wes asked four questions relating to High School Equivalency instruction:

Wes received four responses. One response was a single sentence: "We have exclusively used GED.com as our provider." One response was an invitation to meet at a later date to discuss in greater detail, which never happened. Wes also spoke with community-based providers and received considerably better feedback. Still, the lack of responses spoke volumes about the state's interest in equivalency options.

Who, then, is to blame for the declining numbers of test-takers and GED's return to monopolization of Texas?

It begins with the passage of the Texas House Bill 1956. This bill provides a way for adult learners who, lacking credits or tests from their high school, to return to complete those missing pieces and graduate with a diploma. (As a good option, we should all be in support of this, but it does affect the number of GED or HiSET test-takers). We can blame the Texas Education Agency and the State Board of Education. Their bureaucratic red tape and rigid timelines do not allow flexibility in applying for state contracts, and the timing of the contract renewal fell squarely in the height of uncertainty surrounding the COVID-19 pandemic. Speaking of COVID-19, the closure of face-to-face instructional programs and the lack of digital literacy and computer hardware among adult learners lead to a steep decline in student enrollment. Testing centers shut their doors, and a test-at-home option was unavailable until 2021. As the federal fund distributor, the Texas Workforce Commission was slow to contract with ETS HiSET for vouchers to eliminate the cost of subject tests for students. GED had vouchers in place four to five months before HiSET did.

Additionally, TWC leadership appeared uninformed on essential matters related to HiSET's departure. Texas governmental agencies cannot promote test options to students (states like California can and do promote all tests available to learners), so the onus of awareness falls to the test providers (Pearson for GED and ETS for HiSET). Texas's ETS HiSET representative did incredible work as a one-woman army in the state. When she left ETS HiSET, the company was slow to replace her, and by the time they had, the global pandemic had taken hold. ETS also had the chance to speak with a member of the State Board of Education, who was instrumental in fighting for test choice in Texas in 2017, and who was willing to fight for special consideration to return to Texas. ETS rejected that opportunity, and so they deserve the blame too.

Finally, we as adult educators deserve the blame. If we are not fighting for ways to help our learners achieve their goals, we are failing our students and failing our communities. In thinking of that single-sentence reply about only using GED, the inability to even consider alternatives to a test (GED) that learners are not passing because 'we have always done things this way and why change?' is the exact kind of thinking that keeps Texas ranked 49th in percentage of adults with a high school diploma or equivalency (per Literacy Texas). Because our state government can't promote options to its citizens, it is up to the teachers, program administrators, and nonprofit agencies to raise the banner and advocate for adult learners. But they didn't, and seven months after HiSET left the state, they still aren't.

Options and updates are few and far between. Adult learners who have not passed all four HiSET subject tests can either complete the exam by driving to Oklahoma, Louisiana, or New Mexico and taking the subject tests in those states (none of these states have residency requirements) or register in those states for the 'Test-At-Home' option, which is more expensive. They can also start entirely anew with the GED test.

On November 2, 2021, an announcement was made that a testing company called PSI Services acquired HiSET. PSI focuses on workforce and career development assessments. At that time, PSI hired the entire HiSET team to continue servicing HiSET students around the country. The transition could take up to a year to complete. If murmurings of the sale were happening in 2021, and it is reasonable to assume it was, then this could be the biggest reason for ETS not pushing to stay in Texas. The unfortunate thing is that the few HiSET supporters from 2017-2021 feel burned by HiSET's leaving. We have heard from many programs in the community that even if HiSET returns in the future, they cannot trust that this will happen again when the going gets tough. In our communications with HiSET's administration, they indicate they are hopeful they can return to Texas, but when that could be is yet to be determined.

The Tarrant Literacy Coalition will continue to fight for HSE test choice in the state; because choice matters. Choice builds ownership in learning. Choice emboldens true differentiation. Choice allows learners to display their skills in the way that best represents their knowledge. And choice + agency = learning. The fight is arduous, as the response to our calls for support is tepid at best; however, the fight is critical to the future of our state.

All links in this article, as well as a recorded version of the "Autopsy to Advocacy" presentation can be found at https://tinyurl.com/EdOpPt4

*The exception is 2013, before the GED exam changed, updating content and delivery and nullifying any partially completed test results.

** The exception here is the start of the pandemic in 2020. ETS HiSET's 'business decision' line was in the context of ETS being a nonprofit organization, and all nonprofits were significantly negatively affected by the pandemic. The justification was a reduction of overall services, focusing inwardly and strengthening markets on the cusp of success or failure. Texas, it would seem, was clearly in the failure column.